An authentic historical jewel of the Catalan Architectural Heritage.

The farmhouse is partially surrounded by a fortified wall with a sentry box with several loopholes.

The estate has several buildings. In front of the farmhouse there is an old barn, which has now been converted into modern offices, becoming part of the meat industry facilities. These facilities will be removed with the new hotel project.

The main house has three floors and large open spaces for renovation. There is a large amount of water, with a 100 feet deep well. 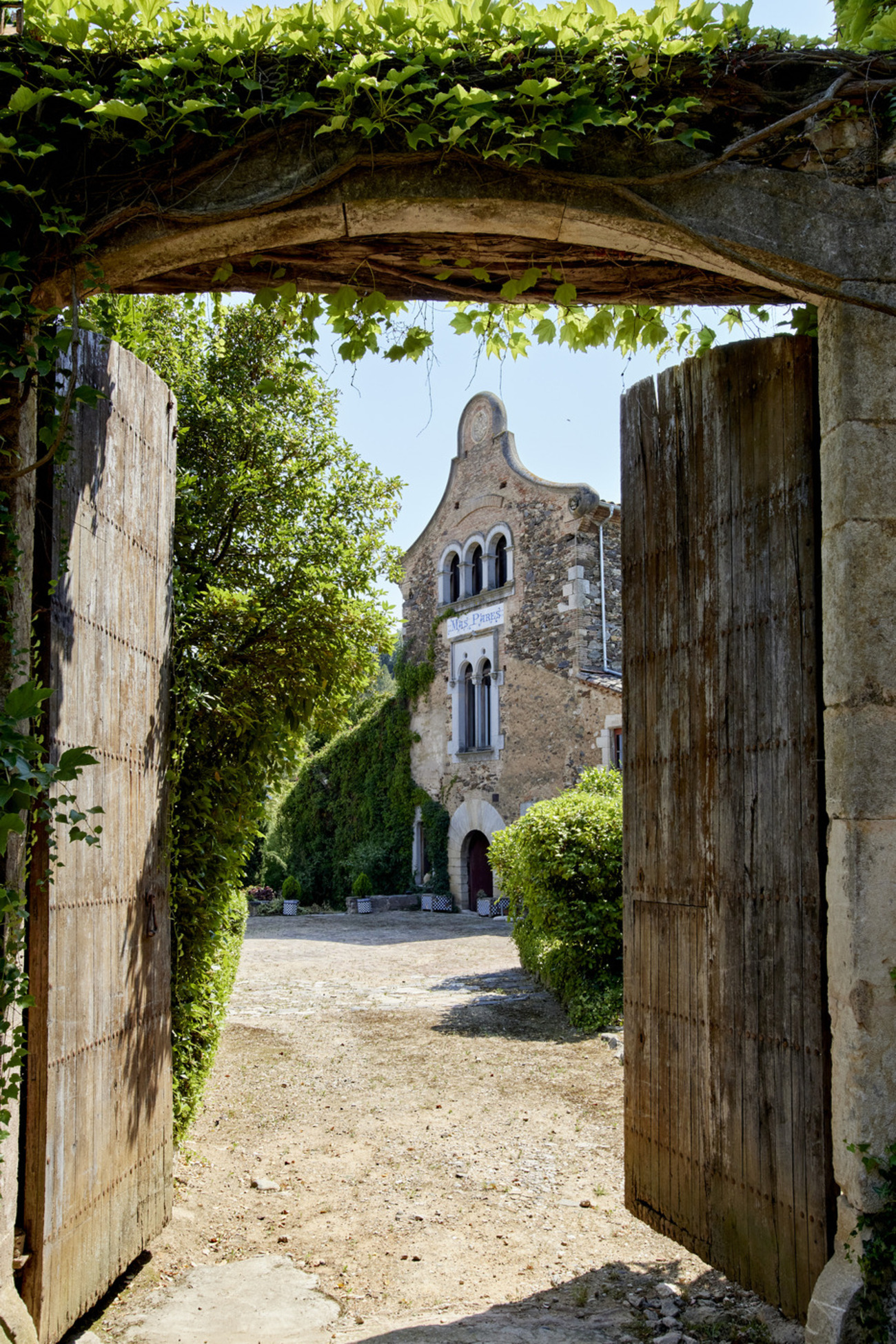 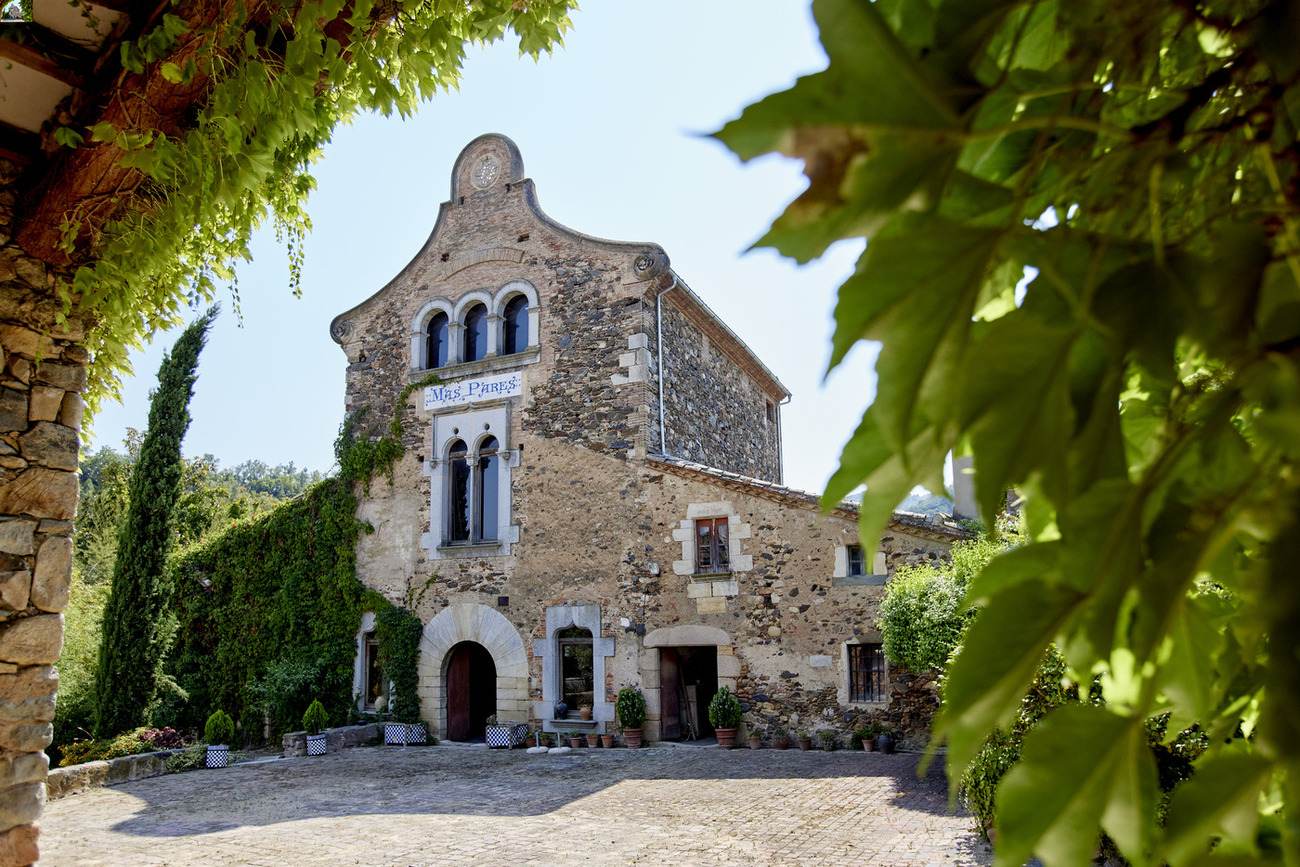 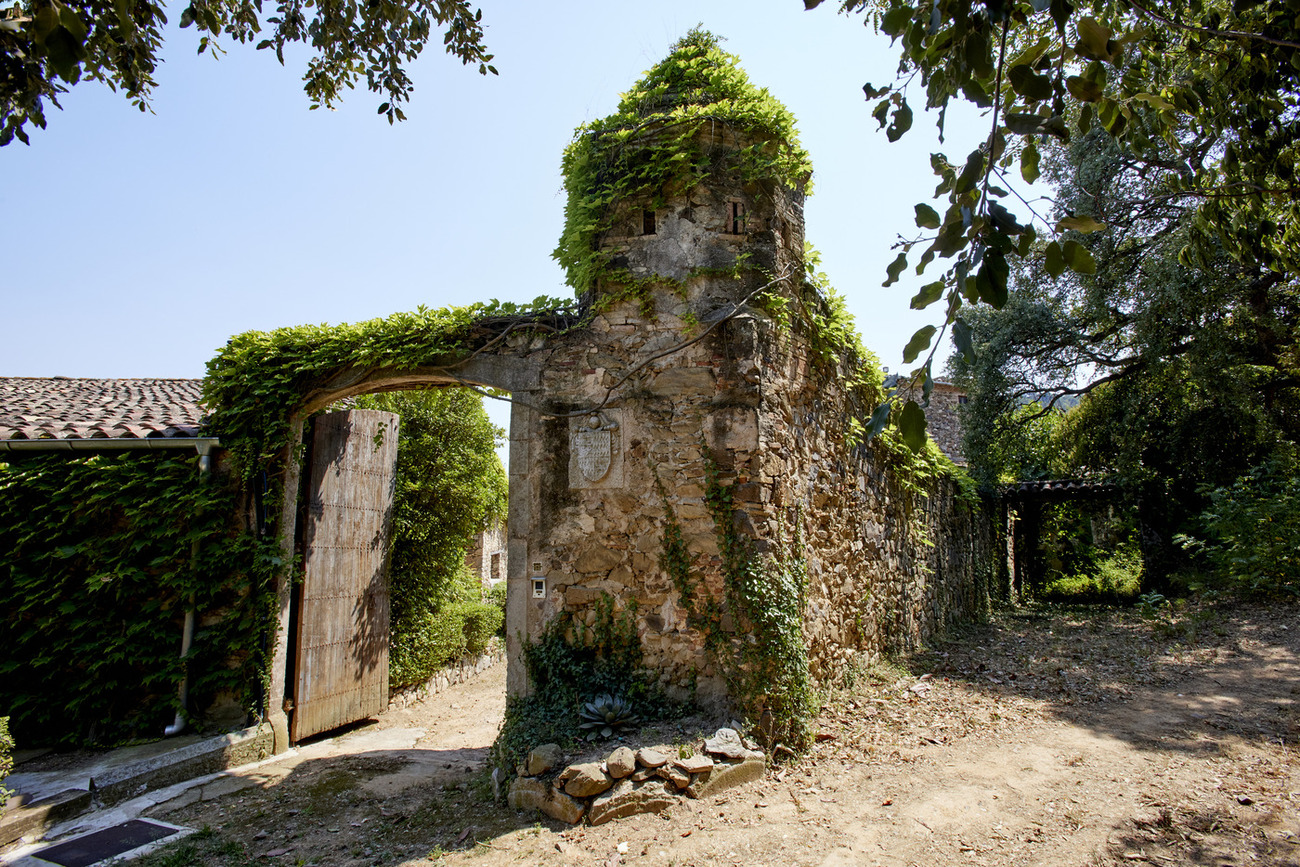 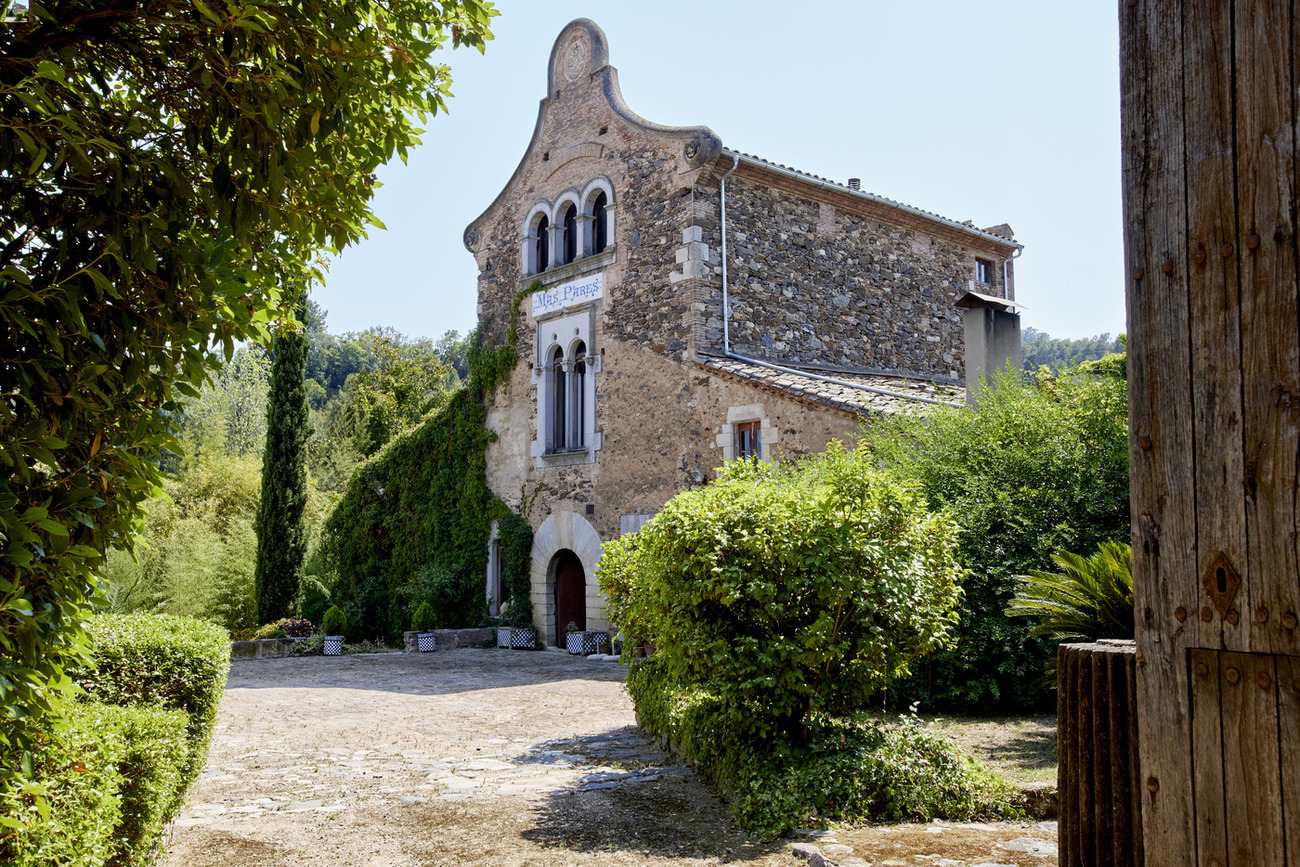 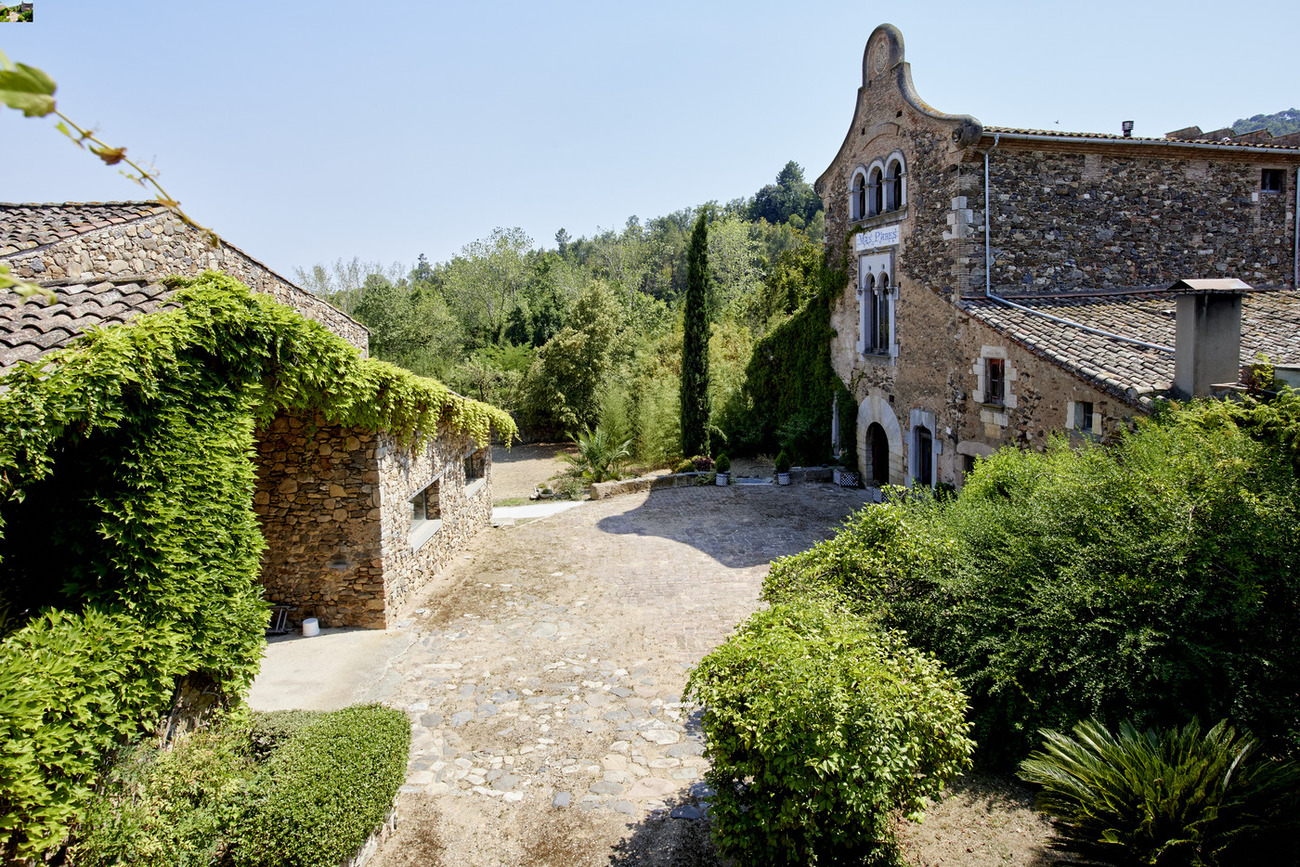 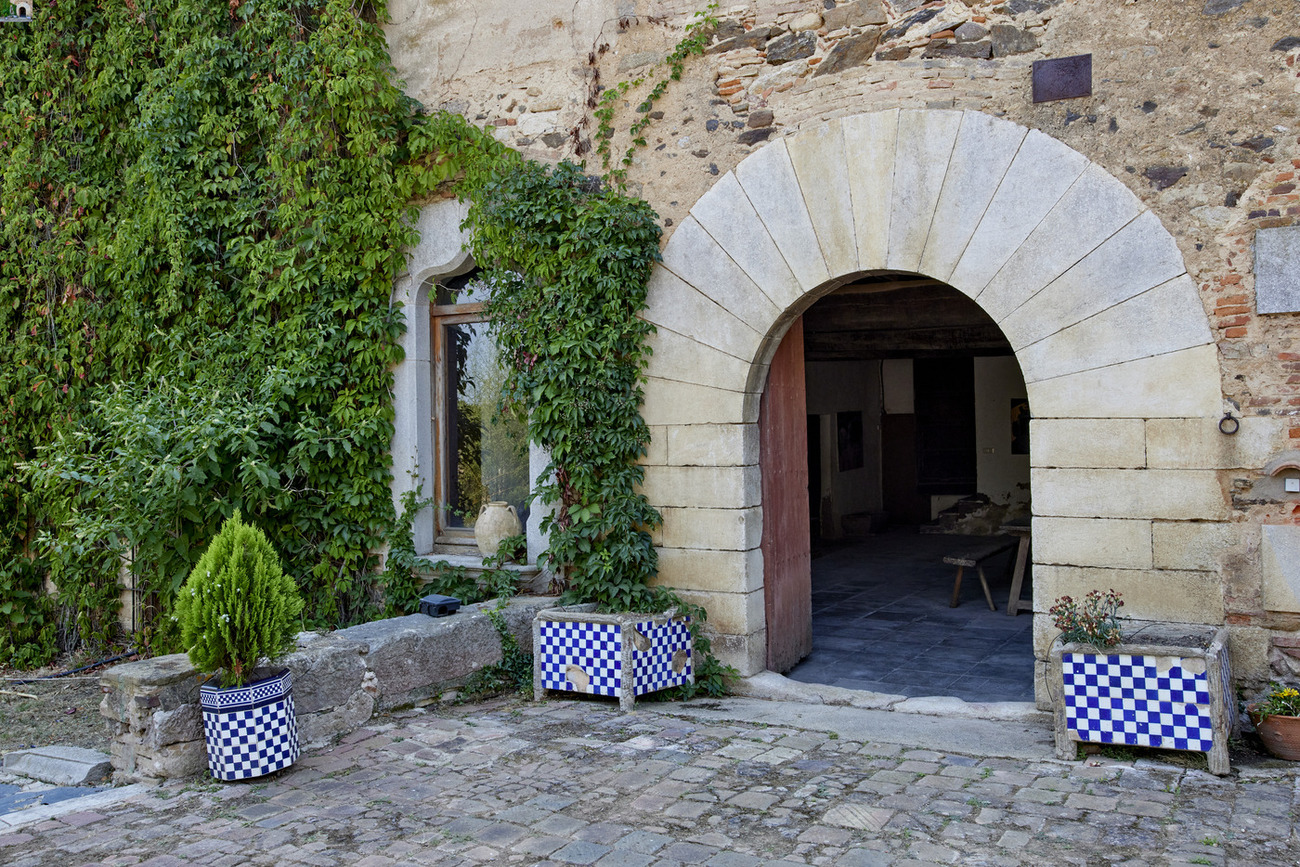 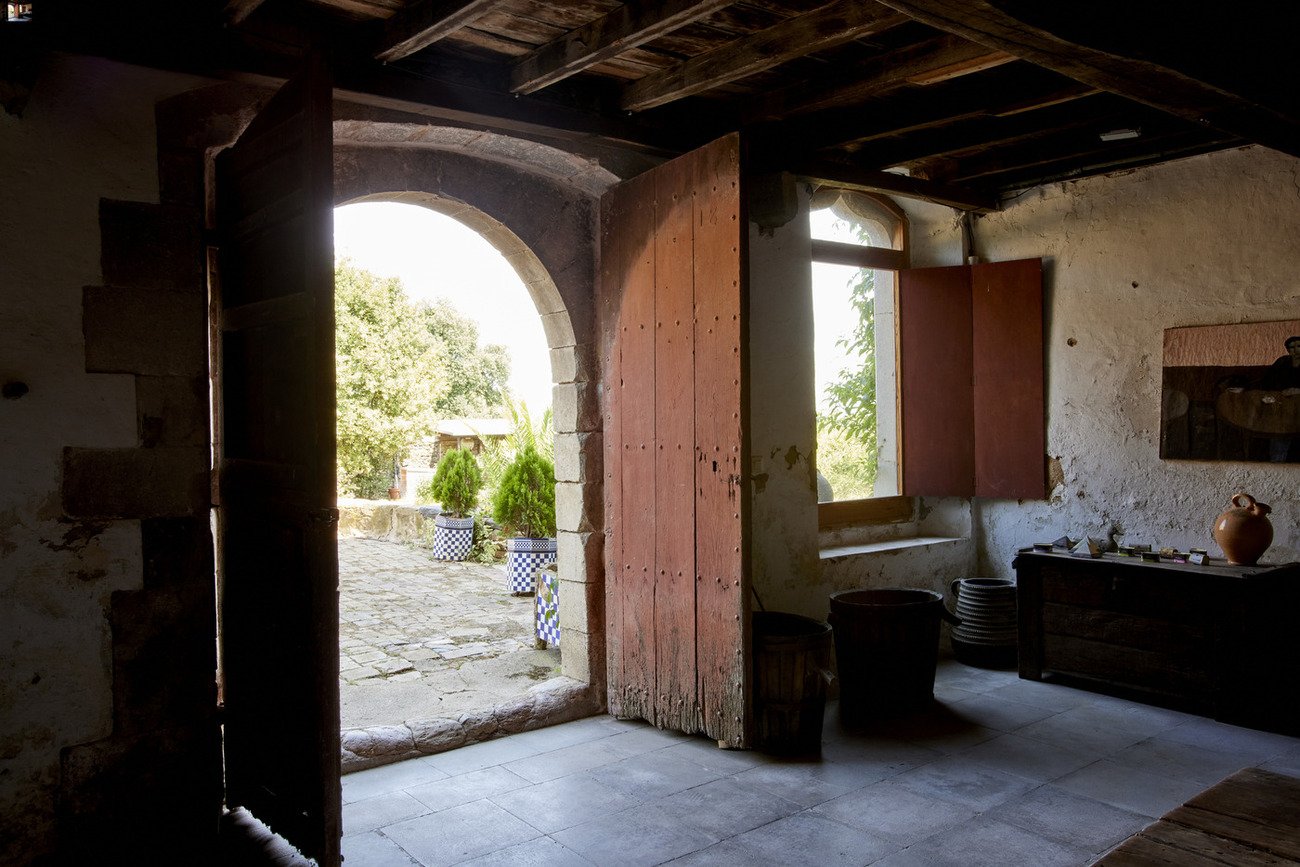 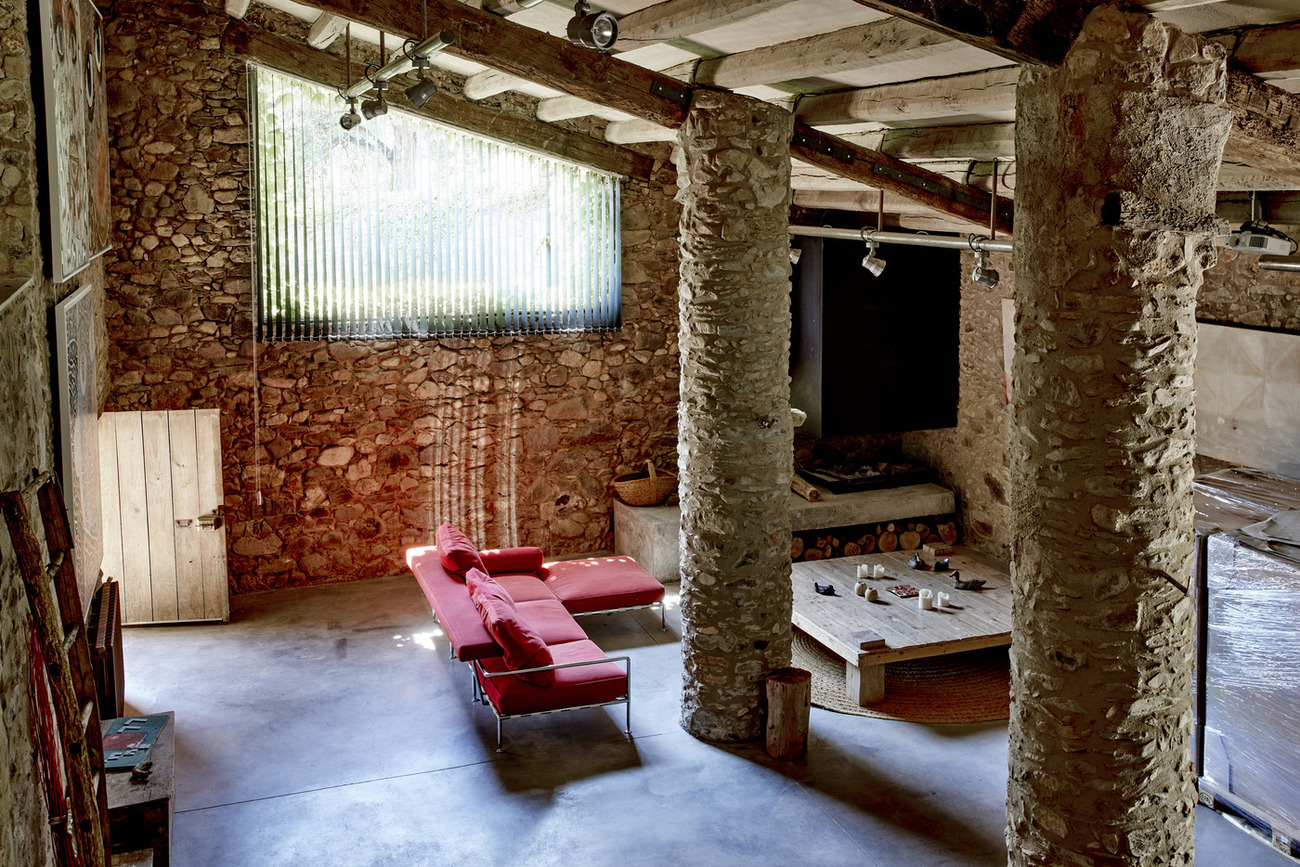 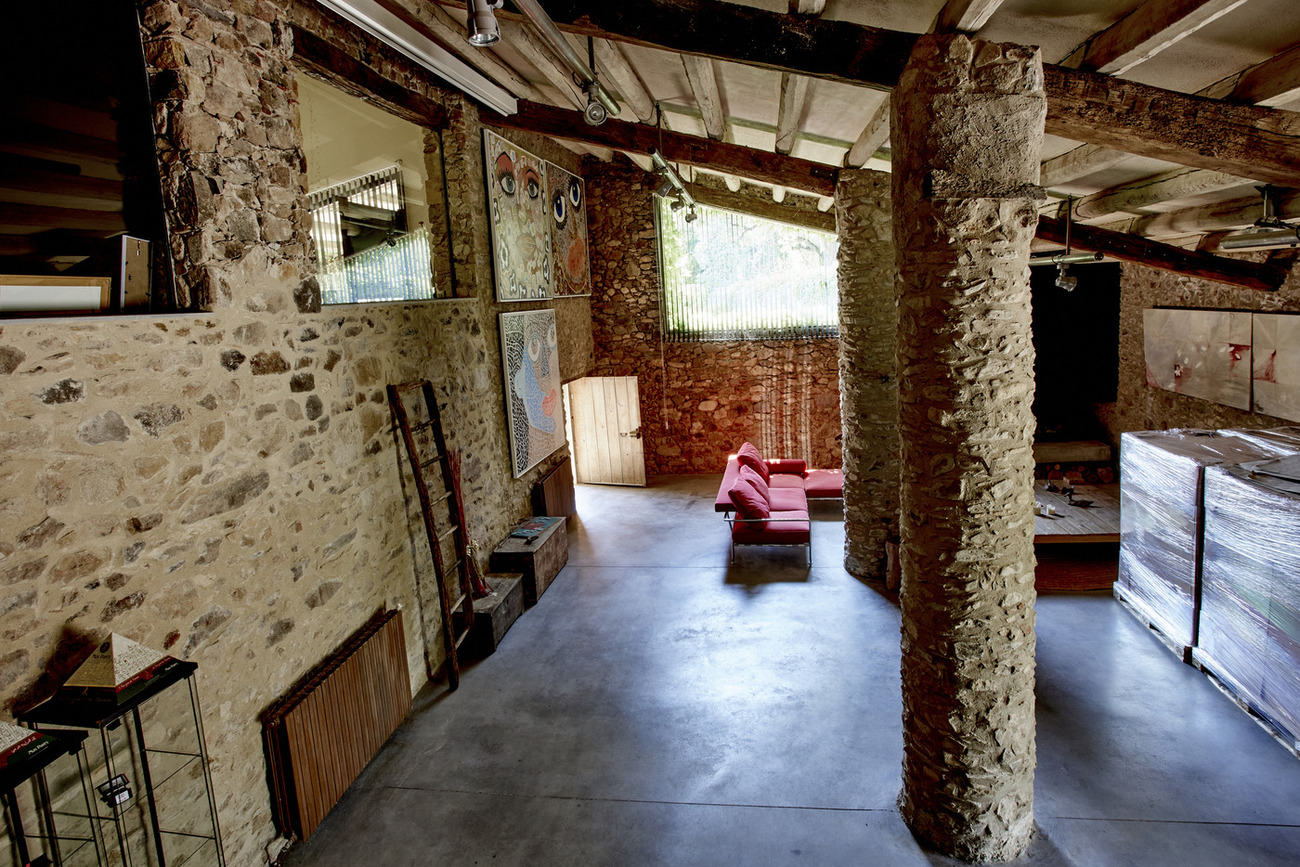 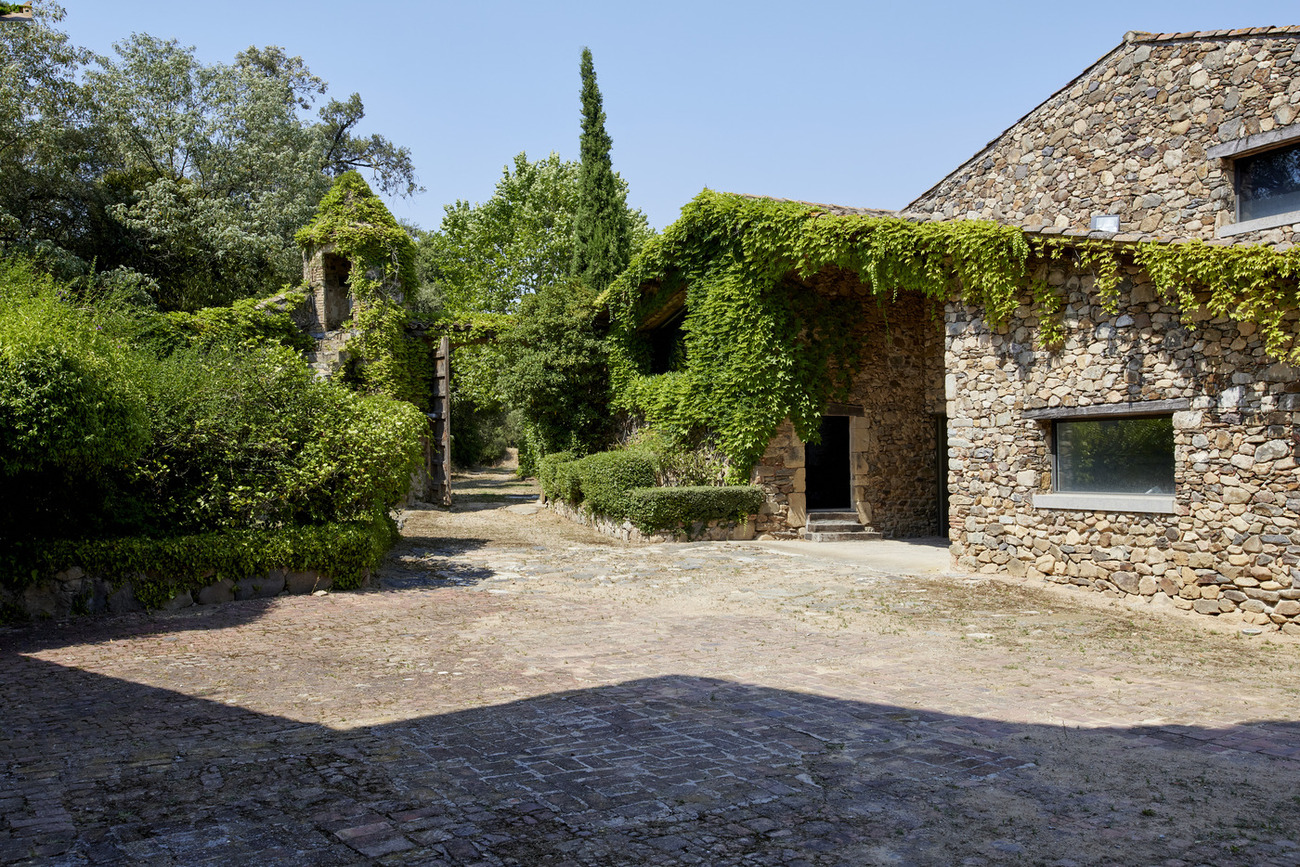 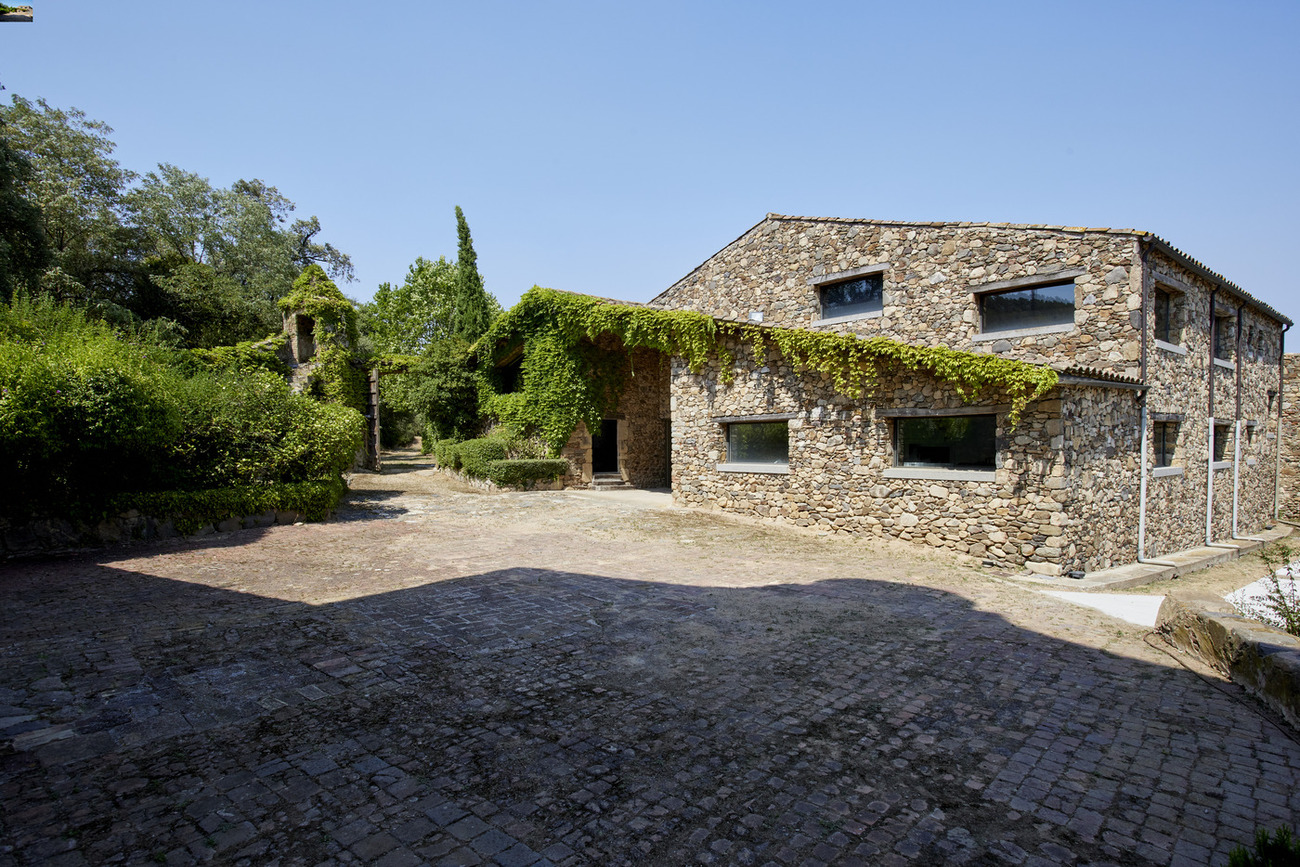 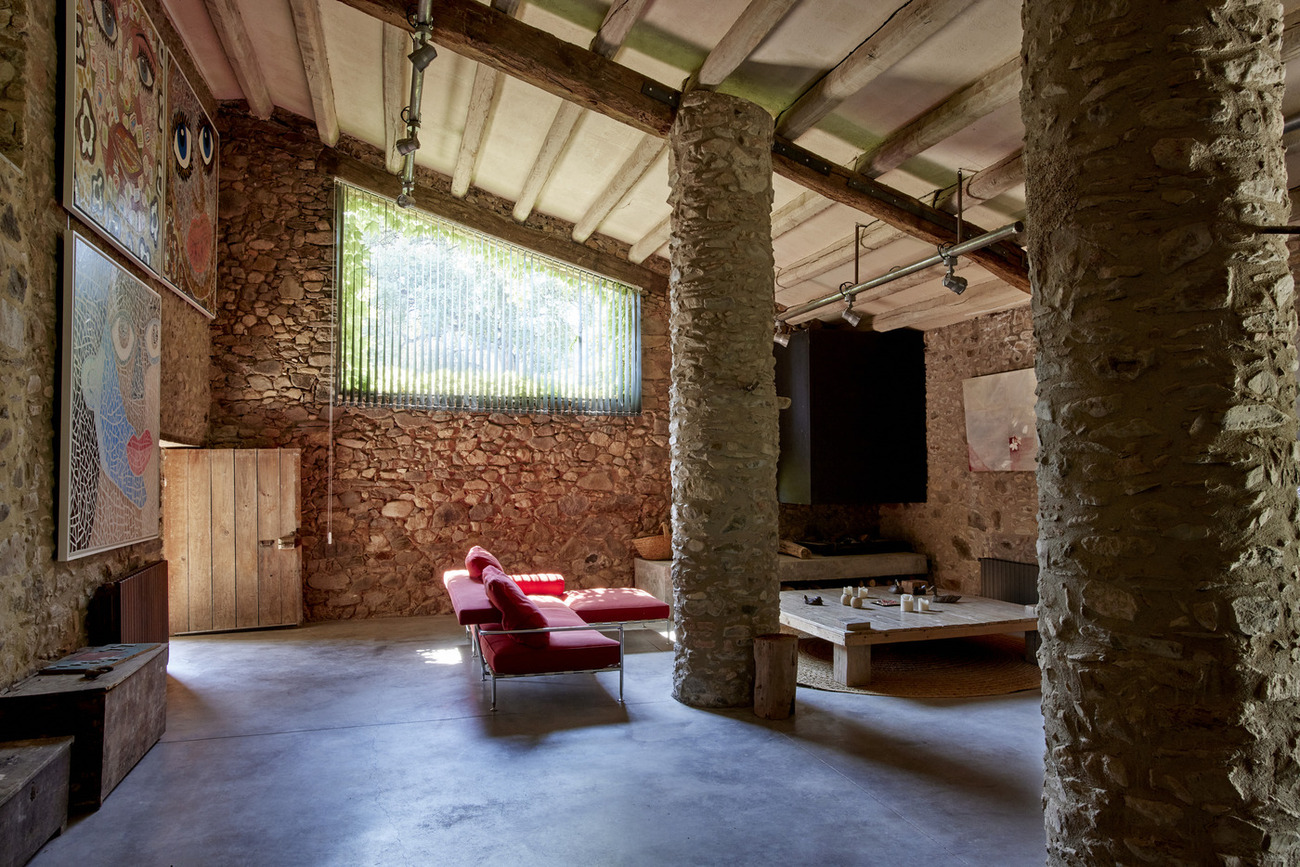 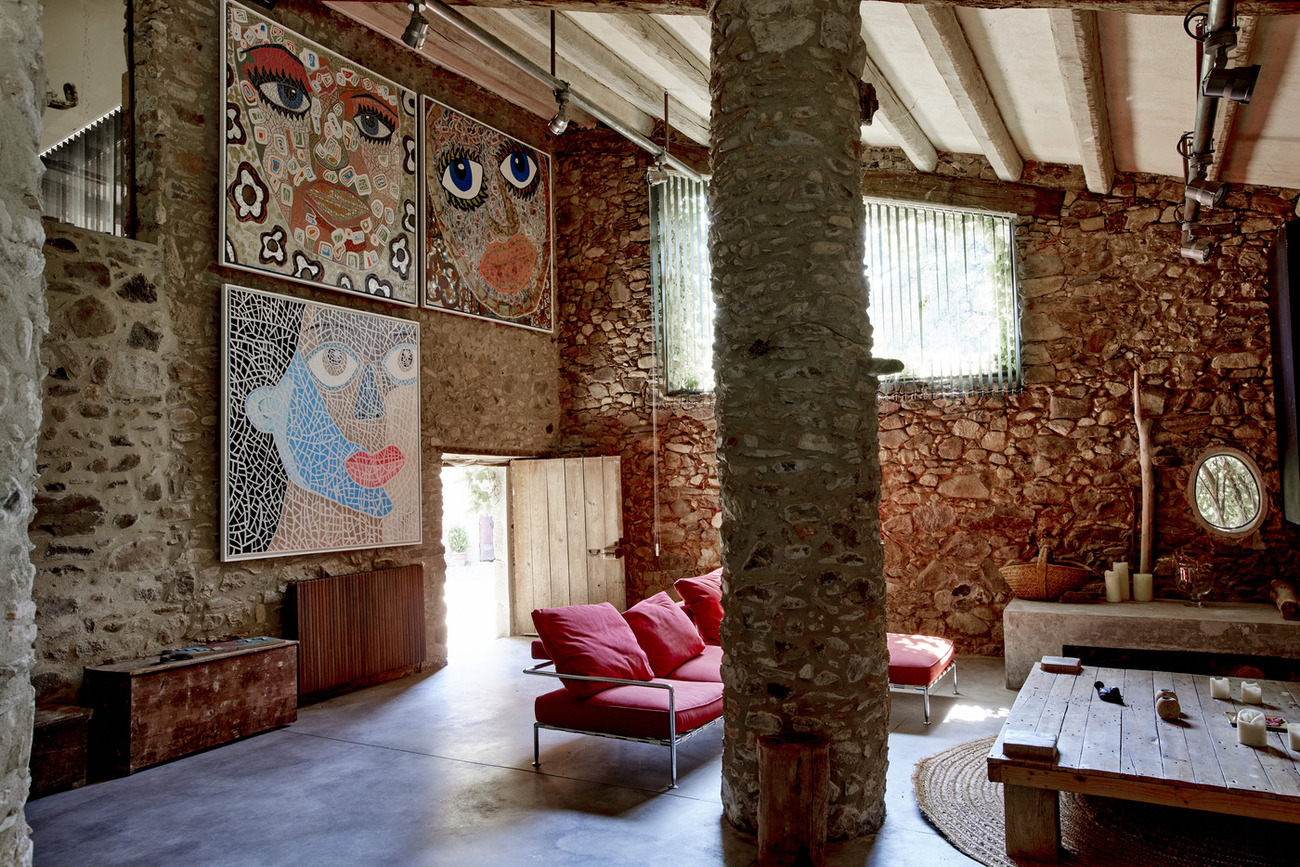 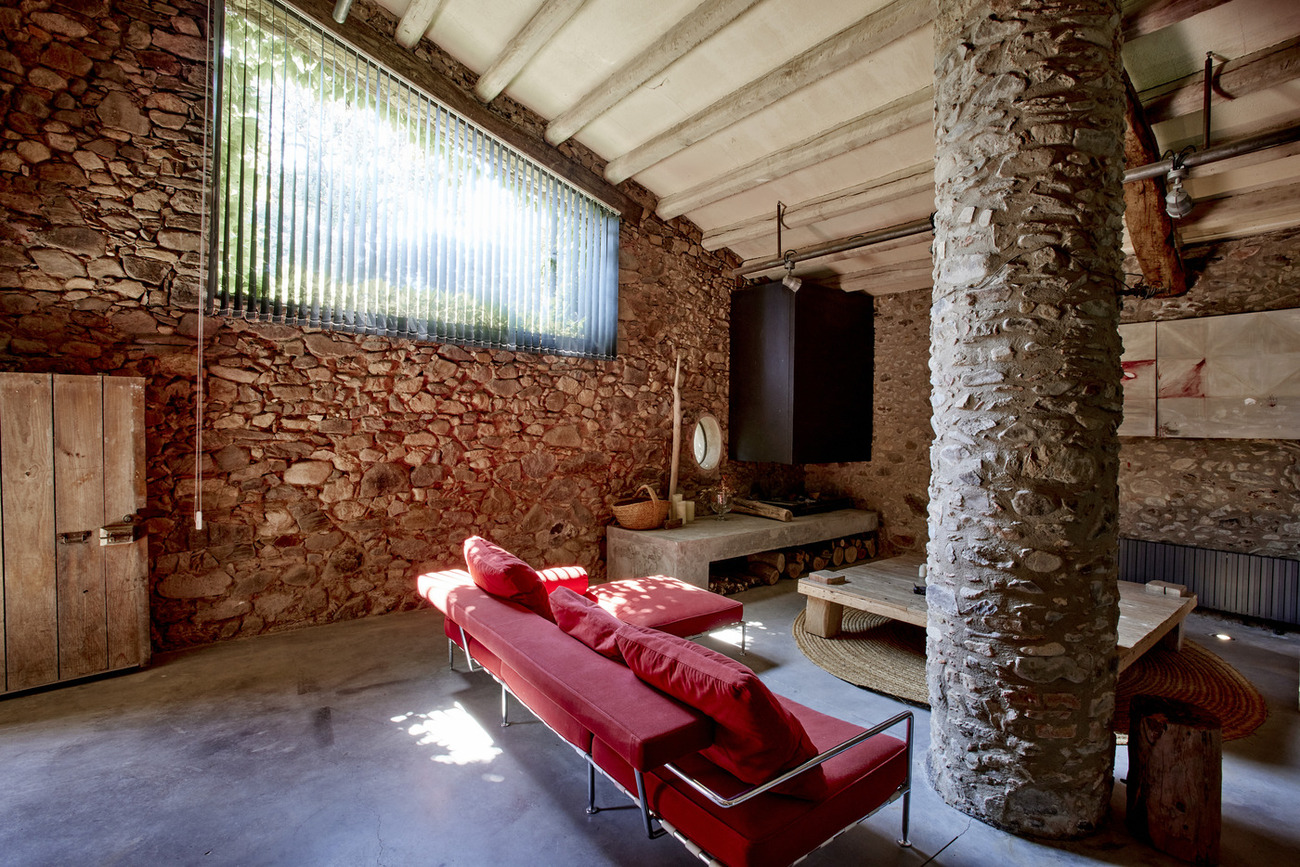 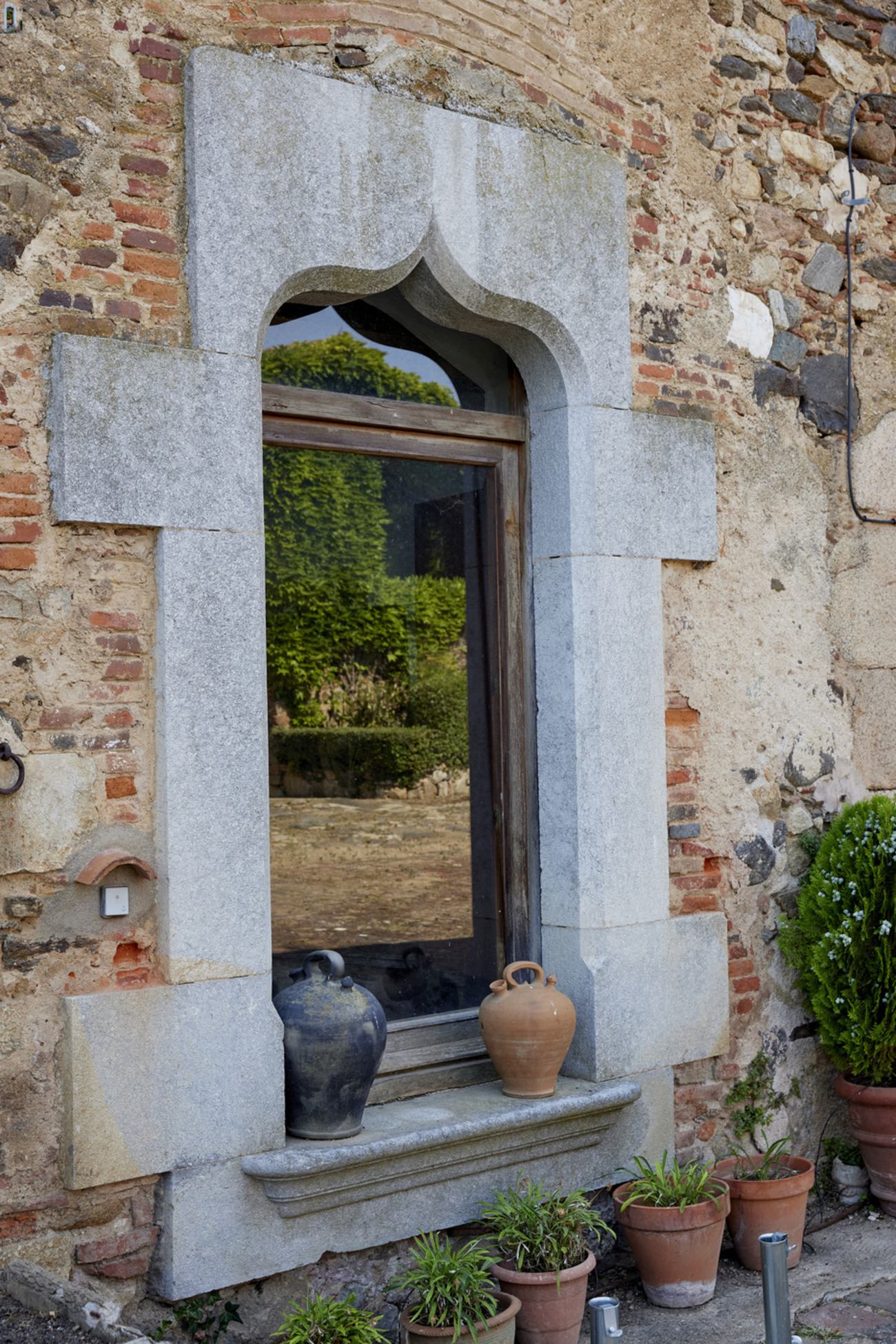 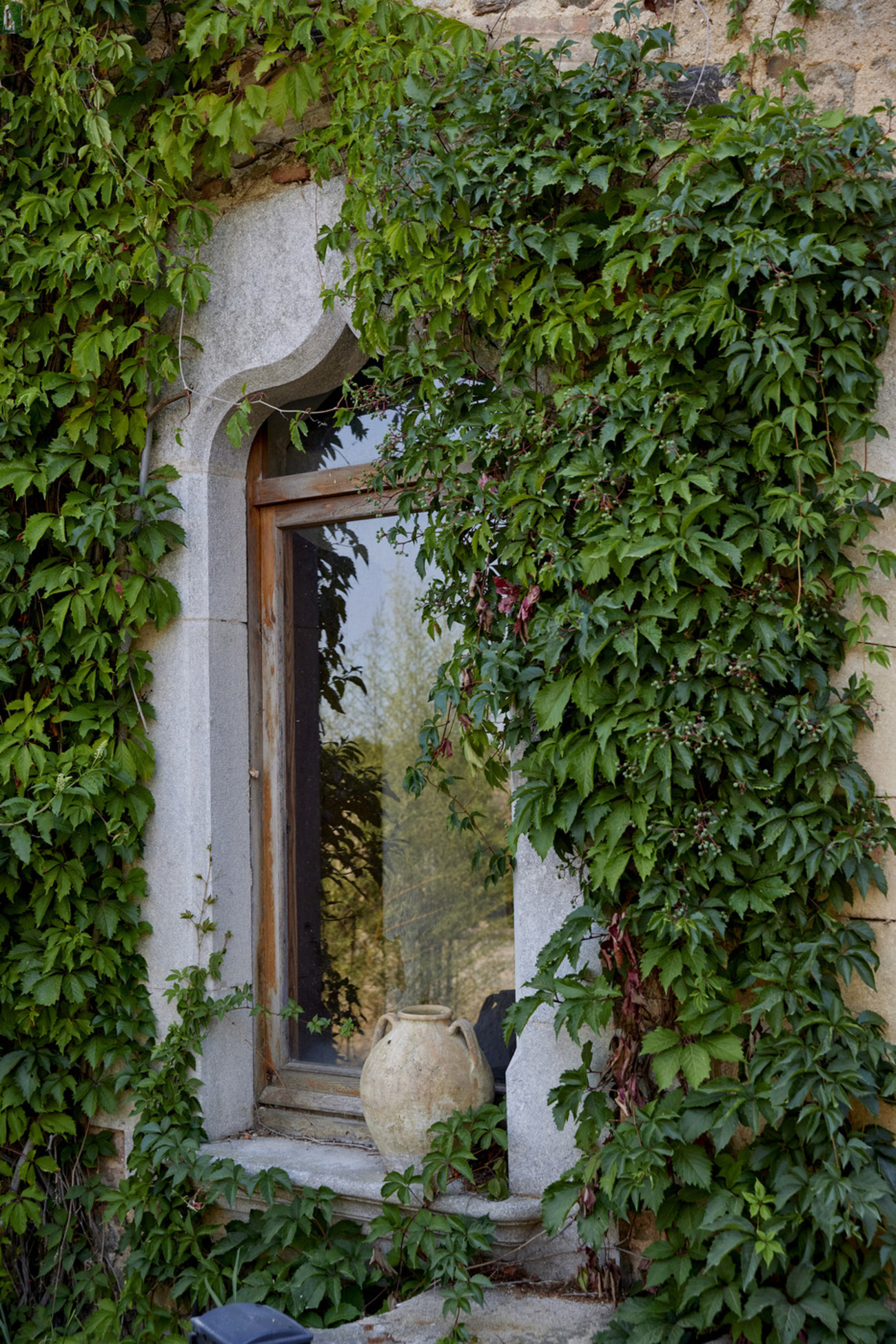 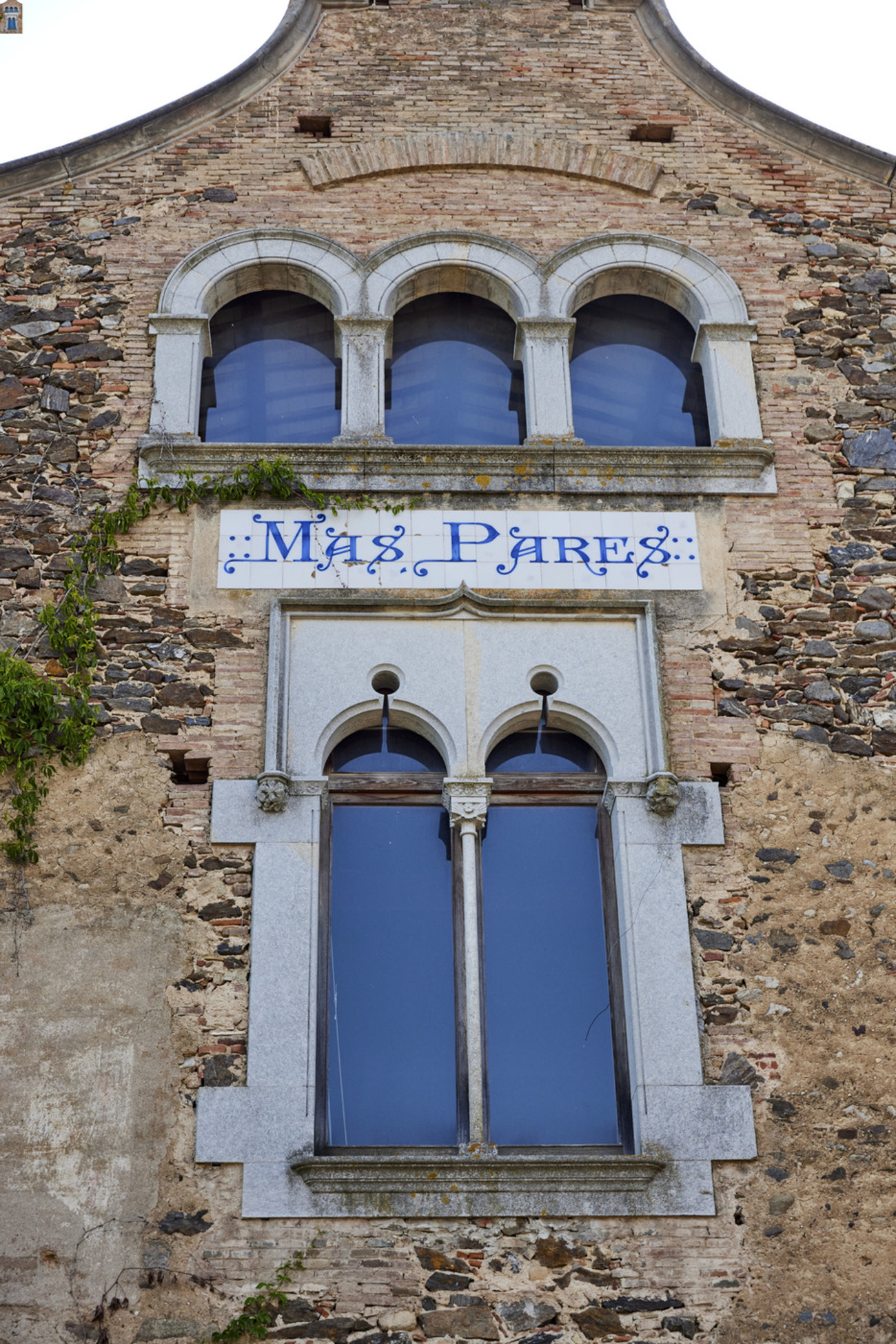 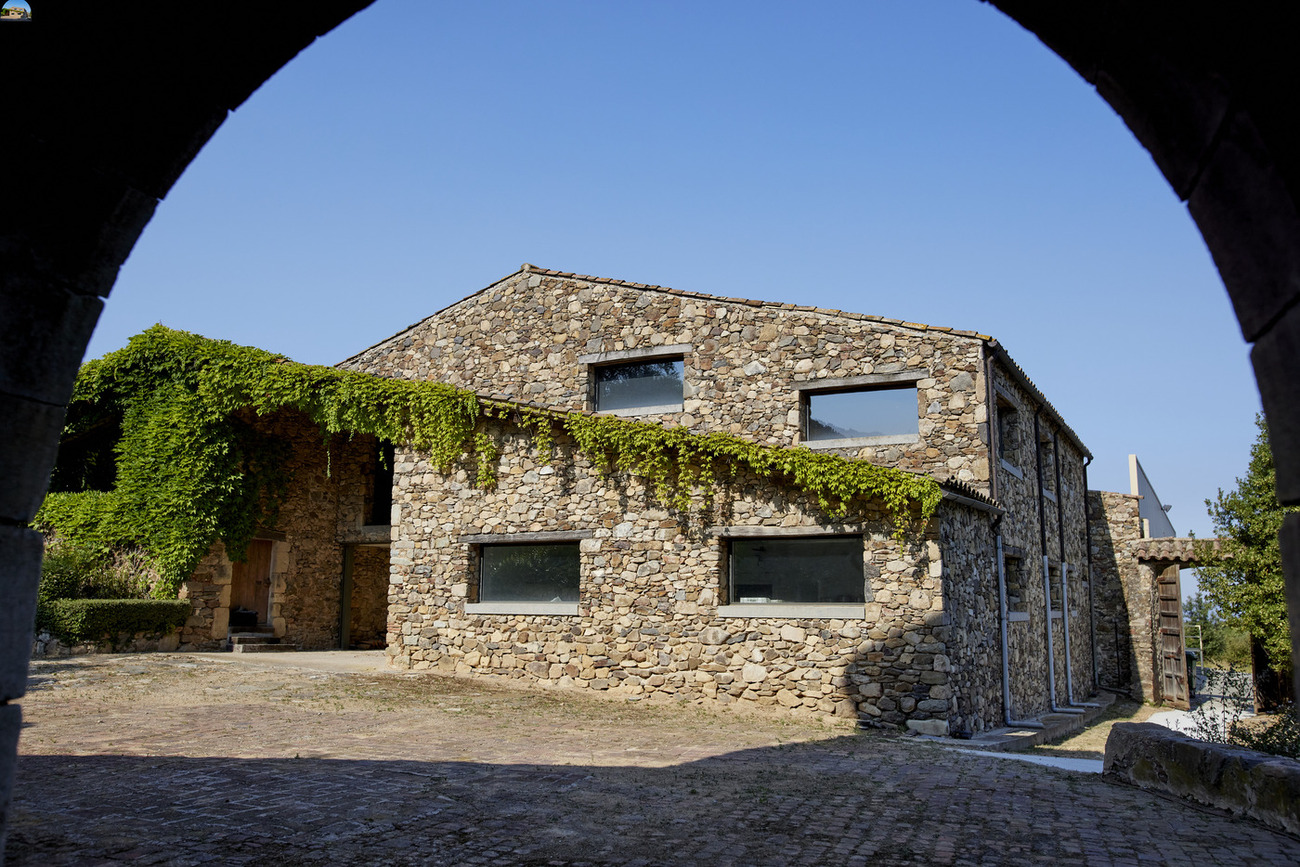 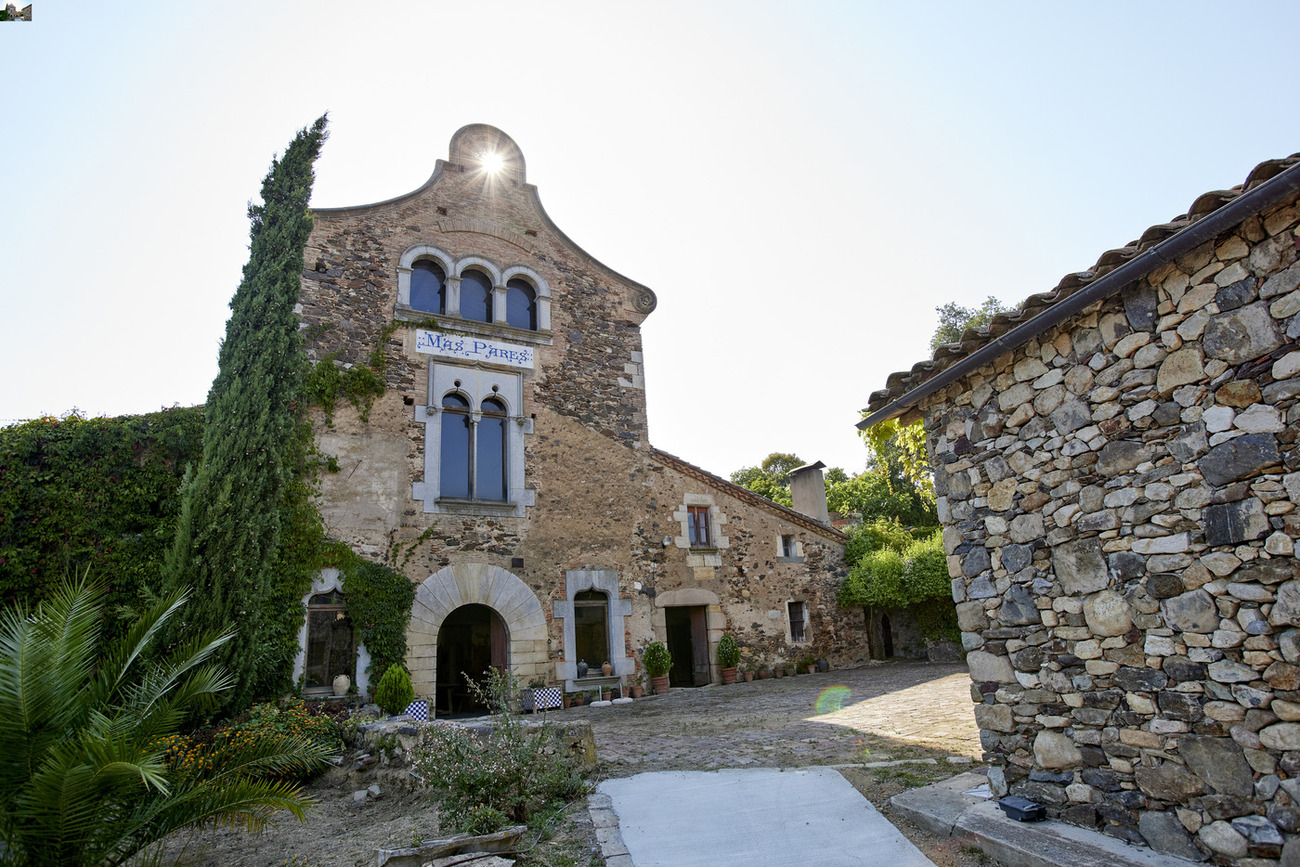 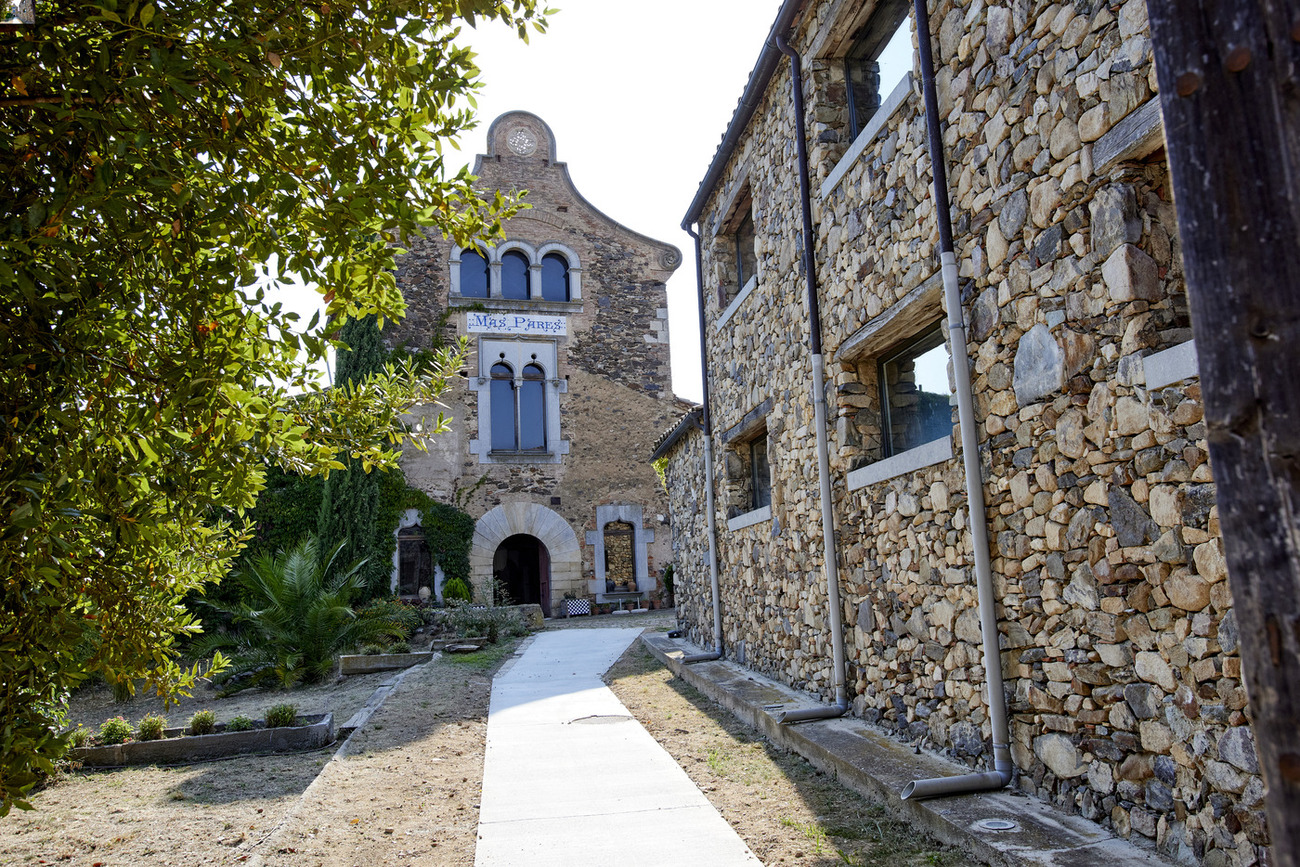 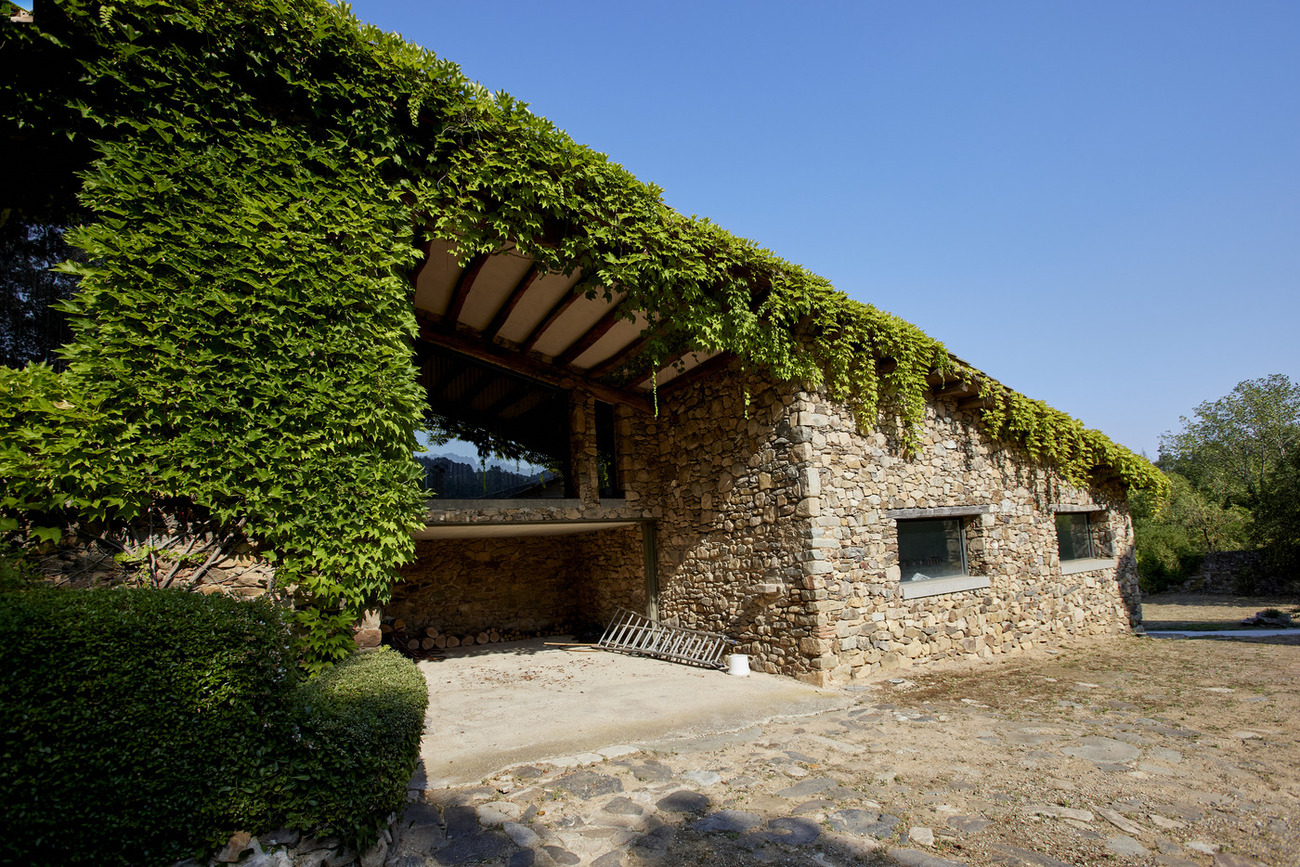 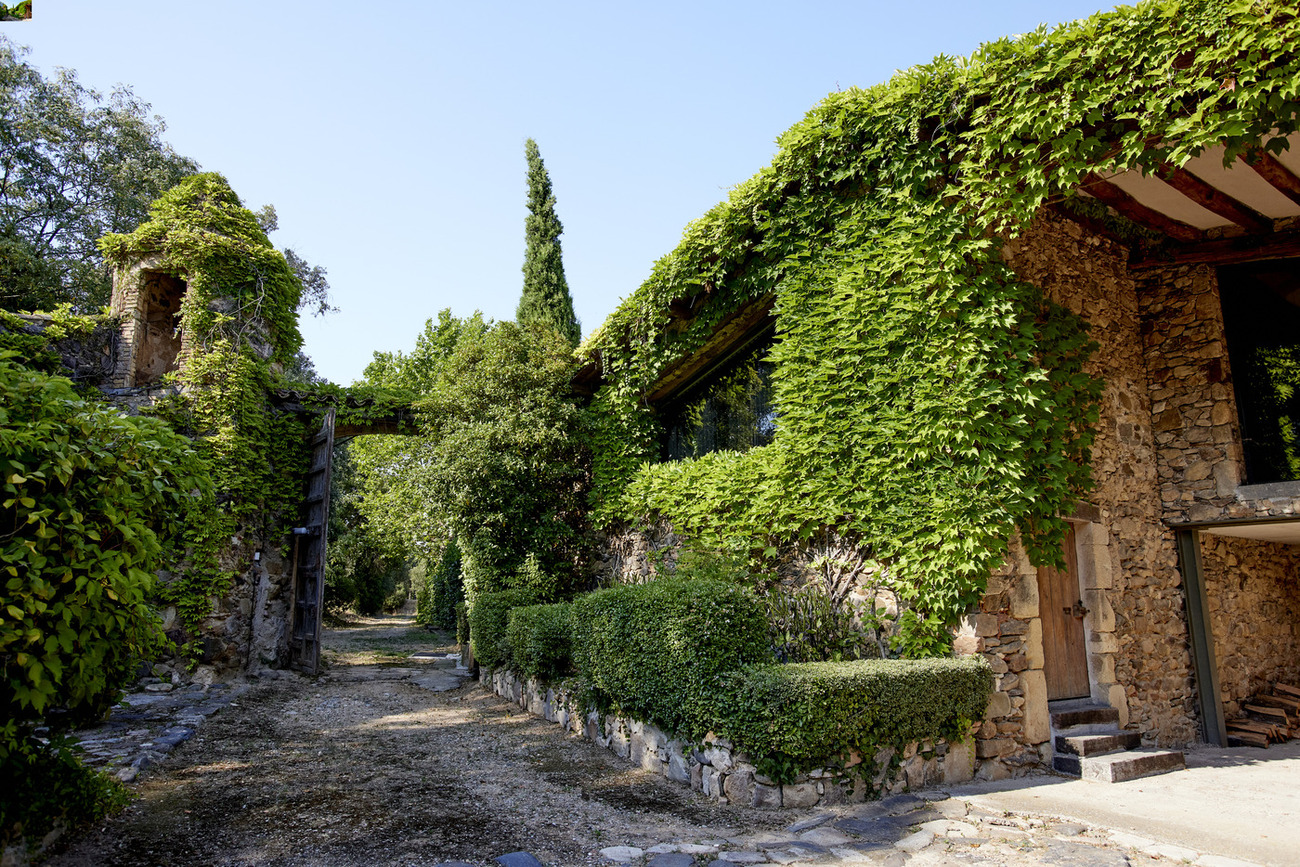 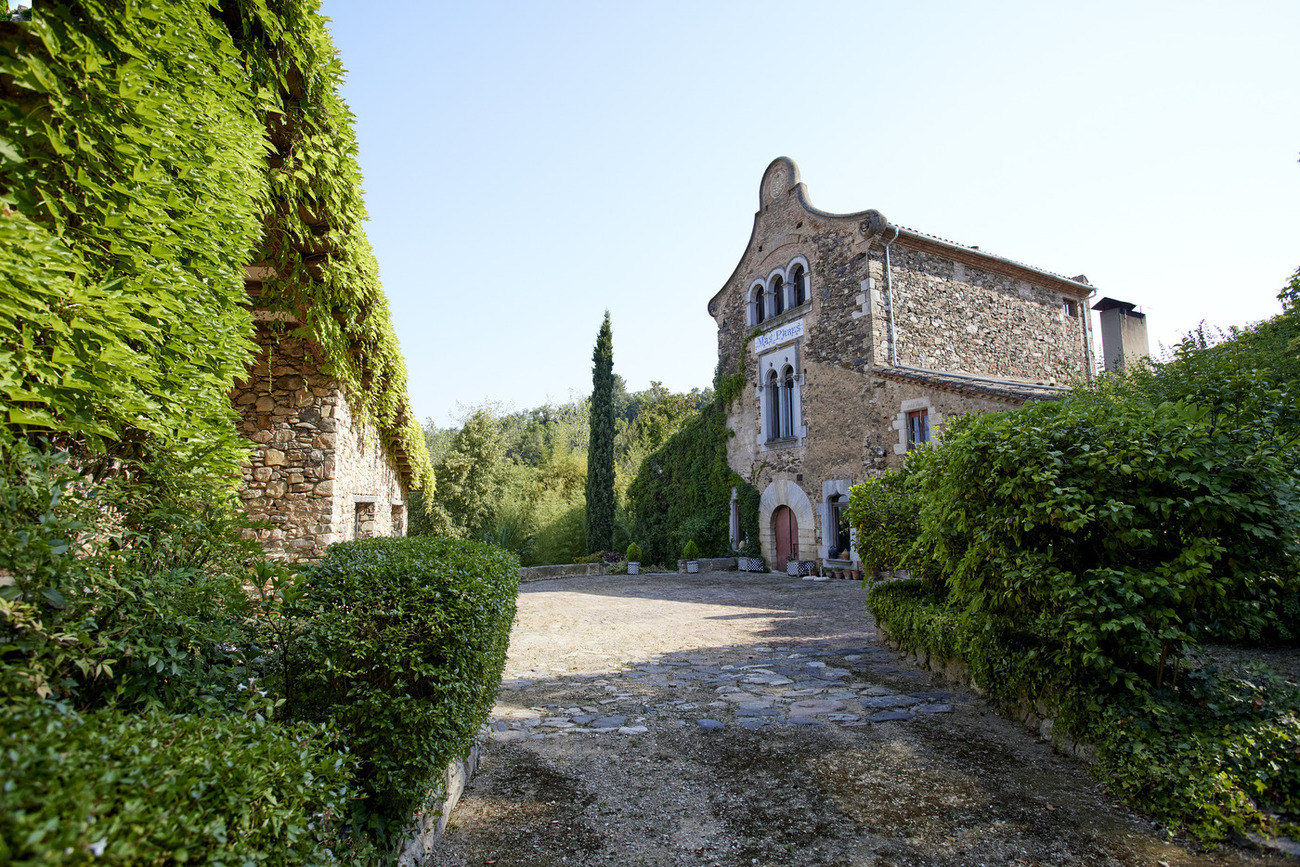 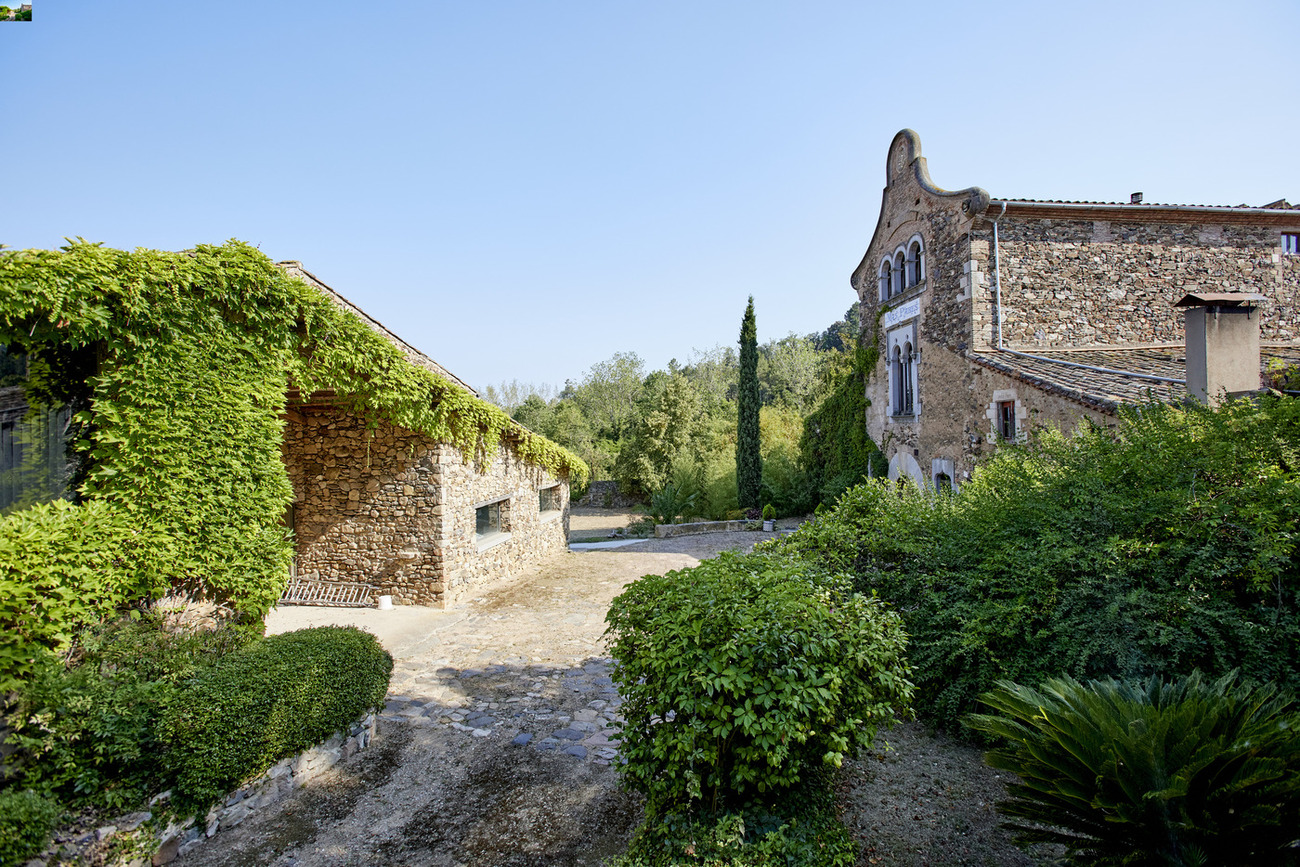 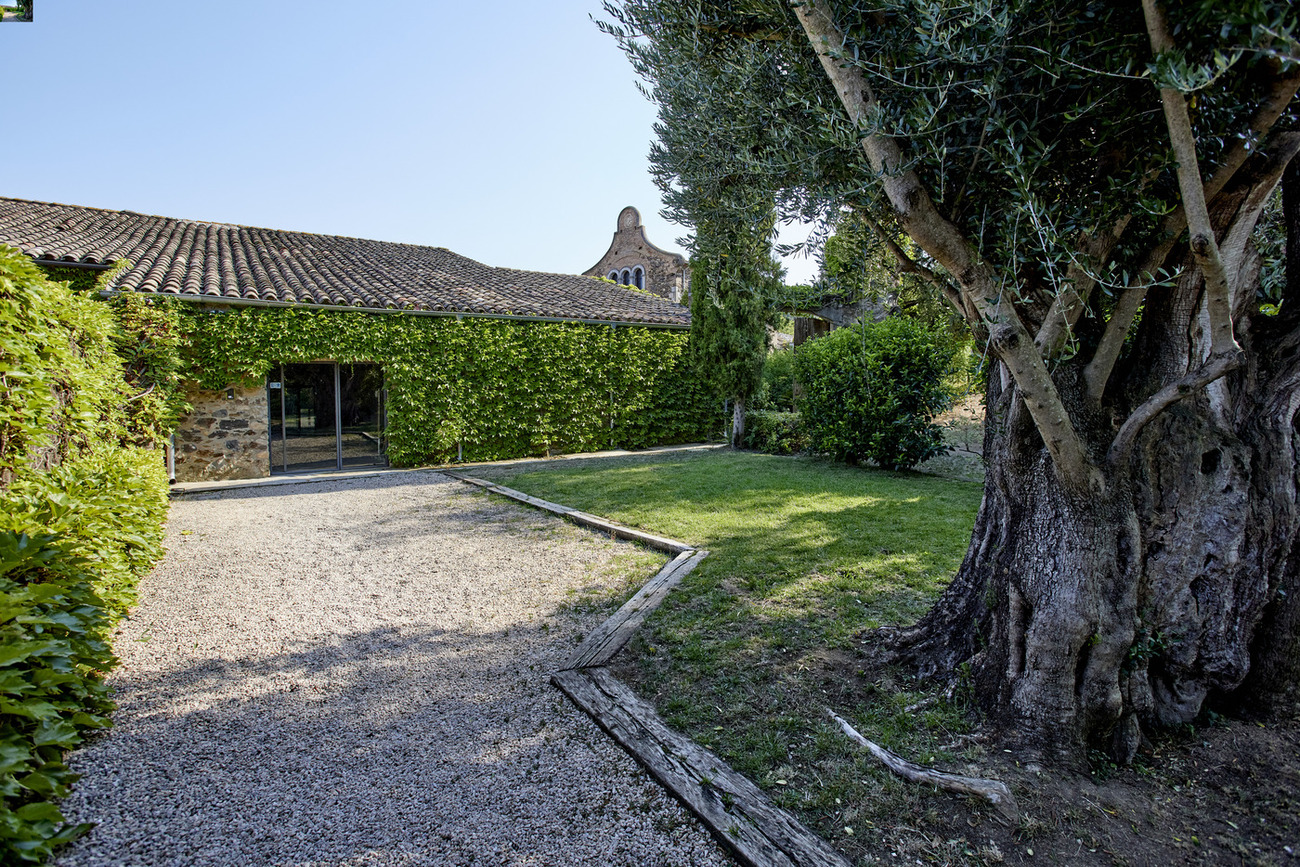 The farmhouse is located in the enclave of Brunyola, in the region of Selva.
The property was created in what is currently known as the pedanies of San Martin Sapresa, belonging to the Baroina of Brunyola Castle, a small village of 80 inhabitants, in Girona, in the region of Alt Empordà. AP7 exit 90

The territory is quite mountainous, mostly populated by pine, chestnut and holm oak forests. The small village of Brunyola stands at an altitude of 257 m. on a hill, around the ancient castle of Brunyola.

It has a privileged location, as it is only a few kilometres away from several interesting towns.

The nearest towns are Santa Coloma de Farners, Vilobí d’Onyar and Anglès.
A short drive away, you can also visit the beautiful medieval town of Besalú, the spa town of Sant Hilari and the villages of Viladrau, Espinelves and Arbucies.

The route has three very marked geographical points, which form a sort of imaginary triangle: Cadaqués-Portlligat, Figueres and Púbol.
All of them contain the elements that make up the Dalinian universe: its museums, the landscape, the light, the architecture, the orography, the customs, the legends, the gastronomy… essential for understanding the work and life of Salvador Dalí.

The Empordà is a land of wines. There are 423 winegrowers and some 3.5 million bottles are produced annually. Both white and red wines, the DO Empordà wines…

The 126 hectares make up a natural site, where there are 75 hectares of forest and the other 60 hectares of woodland, mainly hazel and chestnut trees.

The design of the rehabilitation project will focus on obtaining the greatest sustainability, taking into account the four orientations and the movement of light, with the façade of the old farmhouse facing north, where it has the entrance.

The views of the surroundings, with centenary trees, the exclusivity and privacy of the estate are to be highlighted.

The first news about the existence of Mas Parés is the deed of purchase of the property in 1343.
In the CONSELL COMARCAL de la SELVA, about five years ago, a DOCUMENTARY BACKGROUND was deposited about the property, its history, relevant data, etc… which is permanently exhibited in this public body, based in the neighbouring town of SANTA COLOMA DE FARNERS, due to the relevance that this property had/has in the region.

The architectural style of the farmhouse has a modernist and Catalan Noucentista touch.

Mas Parés is a rectangular farmhouse of considerable dimensions, consisting of a ground floor and two upper floors, covered with a gable roof with slopes on the sides.

The ground floor has seven openings, especially the large entrance doorway with a semicircular arch, equipped with robust and powerful voussoirs, very well worked and squared. There are also two secondary doorways: on the one hand, the doorway in the form of a large arch. On the other, the quadrangular doorway with a powerful monolithic lintel and well-cut stone pillars.

On the first floor or noble floor there are four openings, with the large Gothic window in the centre being particularly noteworthy.
The monolithic stone or Girona limestone window is complemented by a series of very interesting ornamental elements.

First of all, there is the dust cap made up of the superimposition of two light strips and crowned in the centre by a small pointed arch.

Secondly, the back of the chandelier, from which the two strips that make up the dust cap start, are decorated with sculpted decoration.

Thirdly, the imposts are decorated with small circular motifs.

Fourthly, the mullion on which the two arches rest is decorated with small circular motifs, which is supported by a slender column with a smooth shaft and a fragile appearance that gives the impression of breaking, which in turn rests on a quadrangular base. Finally, the well-worked and squared stone uprights and the sill are worth mentioning.

Apart from this Gothic window, there are two other interesting elements on the first floor: on the one hand, the living remains of a sundial, which has practically disappeared and which only conserves its original appearance with the rod or bit for marking the hours, which is partially bent. On the other hand, on the lintel of the window on the far left, we can read a very interesting inscription that alludes to one of the original owners of the house, which reads as follows:

At first glance, the first floor has an obvious modern flavour and taste, as evidenced by the attractive curved forms and the vegetal and floral ornamentation, present both in the large circular medallion that crowns the building and in the corbels at the ends of the roof. In the centre of the first floor are three semicircular arched openings, which rest on a worked sill.

Both the three semicircular arches and the sill are made of monolithic stone or Girona limestone. Under the sill with polychrome ceramic we can read: “M A S P A R E S”.

As far as the materials are concerned, stone is the most important. Stone is present in different formats: firstly, on the first and first floors, fragmented and plastered stone predominates. The first floor is dominated by irregular stone blocks, fragmented stones and pebbles, all bound with lime mortar. However, the crowning is where there is a greater concentration of brick. Finally, we have the monolithic stone or Girona limestone located both in the Gothic window on the main floor and in the three semicircular arches on the first floor.

It is worth highlighting the aesthetic value that the neo-Gothic elements introduced in 1900 add to the façade, as well as the differential value with respect to other farmhouses provided by the extension of the central bay to a third floor.

Another of the architectural pieces that give value to Mas Parés is the fortified entrance to the enclosure, where various agricultural treatises were written by the family’s ancestors, as well as translations from Latin into Catalan of documents relating to the owner family, which with its sentry box and stone staircase give the complex an added historical landscape value.

Source: See the library/documentary collection of Mas Pares, on loan to the Consell Comarcal de la Selva, in the town of Santa Coloma de Farners, where extensive historical information on the property and the family, as well as some of its members, is permanently on display.

It has belonged to the same family since the 13th century.

Since 1920, when Mas Parés was built, the building has undergone numerous alterations.

The state of conservation is quite good and except for some specific aspects, such as the detachment of stones from the upper part of the farmhouse, the rest is in good condition.

The farmhouse was extensively remodelled around 1900. The works specifically involved the construction of a third floor and the coronamen.

The old stables have been completely refurbished and have 200 m2, renovated in 2002, adaptable to multiple uses.

The main house from the 13th century, of large dimensions, three floors and ample spaces, currently in need of renovation, conserves historical architectural elements of great value.
Two beams from the Eiffel workshop of the time have been preserved. Eiffel carried out several works in Girona, the most relevant being the iron bridge of the city of Girona, which links the Jewish quarter with the city’s expansion.

The property is perfect for a hotel conversion or event business. The scope of the project will depend on the final objective of the investor, whether for hotel use or luxury housing.

The differential value of Mas Parés compared to other similar hotels located in farmhouses is the fact that some of the original rooms and outbuildings have been kept unaltered, showing the use given to the building over the years. It has managed to keep a small piece of history inside, conserving spaces and architectural elements that give the complex a different character and added value to the intervention.

The central hall, the library, the old kitchen, the dining room and the wine cellar on the ground floor remain unchanged. In this way we can add the term Casa Museo, a differential character that gives added value to the new hotel.

Restore and conserve the main façade, due to its marked eclectic character, a reflection of the extensions that have been carried out over the years.

Refurbish the existing building, conserving the spaces and rooms mentioned above, integrating the new facilities and equipment necessary for the proper functioning of the new use.

The refurbishment should be extended to its courtyards and outdoor spaces.
As these are one of the great attractions with great potential uses for events and activities of the future hotel.

A three-storey building, each of them for the following uses:

There is also the need to act on the bodies and buildings annexed to the farmhouse: stables, stables and other spaces for agricultural and livestock use.

Annexes. Plans of the Hotel Proposal.
Capex of the proposal: 1.500.000€, excluding exterior volumes.